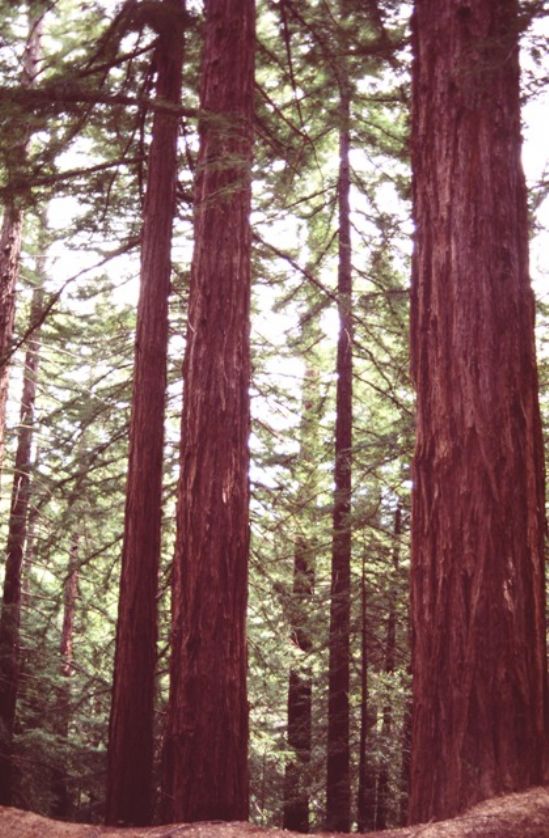 Californian Redwood, or Coast Redwood, is native to the coastal range of California. Indeed, for an Australian forester who grew up surfing along the Great Ocean Road beside the Otway Ranges it is easy to feel at home on the Californian coast. Not only do both coastal roads hug a spectacular series of bays and point breaks, they also share the same tree species:

On the Monterey Peninsula in California, and on a small number of islands off the coast, are the remnants of the native forests of Pinus radiata. A species of little or no commercial value in the USA but one that has become the centrepiece of softwood plantation forestry in Australia, New Zealand and Chile. Right on the coast, fully exposed to the coastal winds, the Monterey Cypress (Cuppressus macrocarpa) hugs the cliffs. It is not surprising that these same species are used by farmers along the Victorian southern coastline to shield themselves and their stock from the cold, salt-laden winds.

Alongside the Pines and Cypresses, the occasional exotic Blue Gum (Eucalyptus globulus) doesn't look so out of place. Blue Gum has become naturalised in California after being widely planted as a fast growing ornamental. In some areas it is dense enough to create a real fire hazard. The same species grows naturally right down to the sea on the steep cliffs along the Great Ocean Road.

To see the native Blue Gum grow to its full potential in Victoria you need to move up the valleys away from the salt winds and into the ranges. With shelter, greater rainfall and deeper soils Blue Gum can be found growing with the tallest hardwood (flowering plant) in the world, the Mountain Ash (Eucalyptus regnans). A contest held in 1888 to find the tallest tree in the colony of Victoria unearthed one Mountain Ash over 320 feet (97 metres) tall in the Otway Forests. Trees of similar size in Tasmania are currently at the centre of the vigorous forest conservation debate. Only one tree species in the world grows taller than the Mountain Ash.

The Californian Redwoods can grow taller than 100m but they are softwoods (cone bearing) trees. Whilst for most people it is a contest of height, what makes the Redwood forests so impressive for me is the sheer mass of timber. Being more tolerant of competition, Redwoods are able to achieve standing timber volumes per hectare two or three times greater than that of the best Mountain Ash forests. Huge trees, growing close together, make us feel so small. Walking into a mature native Redwood forest is like walking into a gothic cathedral. The thick trunks rise up together like the walls; the dense canopies forming a ceiling high above.

Redwood has a pink to deep red heartwood and pale sapwood. The heartwood is moderately strong, light, stable and durable. In the U.S. Redwood is used for decking, fencing, sleepers, bridge timbers, posts, shingles, exterior siding, doors, panelling, furniture and general construction. It can be used as an alternative to Western Red Cedar. The major defect is the presence of knots that weaken the timber. I see potential for Redwood timber to replace imported Western Red Cedar for use in windows, doors, lining boards and outdoor furniture. Being naturally durable makes it an ideal alternative to treated pine.

It is difficult to put a value on Redwood logs grown in Australia. On the West Coast of the USA quality native forest Coast Redwood logs attract prices of over $250 per cubic metre. Unpruned plantation timber is not as sound as native Redwood due to the large knots that arise from the relatively open initial spacing. In a native forest the regeneration is thick killing off the side branches early. In my view, pruning is essential in plantations in order to control the size and location of the knots. Despite the high initial stocking in the Mollongghip plantation many of the dead branches persisting on the lower trunk are over 5cm in diameter.

Redwoods are very easy to prune. The horizontal branches rarely grow large and the soft wood is easy to cut. The wounds heal well. The only thing to watch for is the epicormic shoots that will develop for a couple of years after the final pruning before the canopy develops sufficiently to suppress the buds under the bark. These are new shoots that develop on the stem after pruning and can be easily removed the following year. Epicormic shoots will stop developing once the canopy reaches sufficient size to suppress them: this may be two or three years after the final pruning. I prune my Redwoods to 8 metres using two joined ladders and a harness. 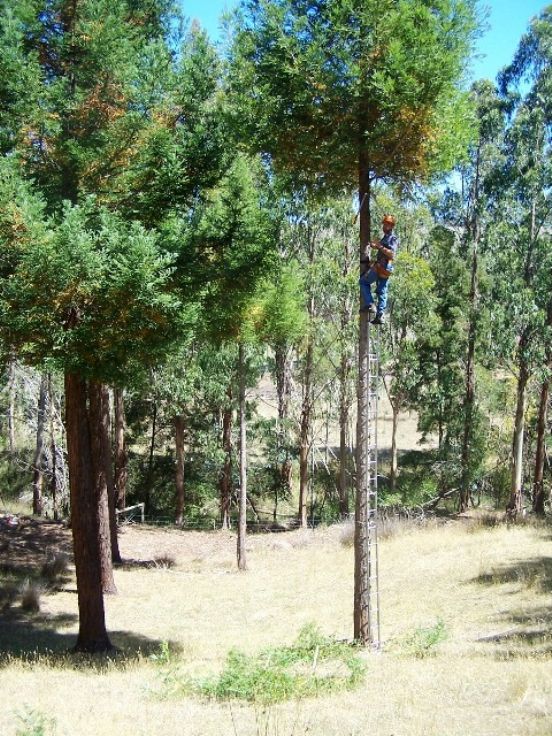 Rowan pruning his Redwoods to 8m

I aim to achieve an underbark diameter of around 65cm so as to produce more than two cubic metres of pruned log per tree. At say $150/m3for the pruned logs this translates to more than $300 per tree - even if I get very little for the unpruned part of the tree. At a final stocking of around 250 trees per hectare I'm expecting the Redwoods to be worth more than $75000/ha as they stand. It just takes time.

Redwoods are slow at first but once they establish a strong root system (which might take 6 years) height growth matches that of eucalypts. My best trees have surpassed 50cm in diameter before age 20 years. Once pruning is complete diameter increments are tremendous. We are now witnessing growth of over 2.5cm/year in diameter on our best trees and expect this to continue until harvest. This would suggest our best trees will reach the target size of about 75cm diameter over bark in around 30-40 years.

Not that I expect to clearfell - what I prefer to do in my sawlog forests is selectively harvest and grow the remaining trees onto to a much larger diameter. They can only become more valuable. Redwood is one species that grows well in the shade so I have already started replanting in the gaps so that I never go back to a cleared paddock.

What will quality Redwood timber be worth in twenty years time? The truth is that no-one knows. I tend to believe that all things natural will become more valuable, especially if they lock-up carbon dioxide, are naturally durable and attractive. In practice I won't harvest any of the trees unless the price makes it worthwhile.

Redwood is particularly easy to mill. I could fell a single tree, mill it with a portable mill, dry the timber in my shed and sell it directly to furniture makers. In this respect it is a much better option than eucalypts which are notoriously difficult to mill and dry.

Redwoods prefer heavy moist soils in cool climates. Even waterlogged clays are fine. But they don't like sandy soils and will die back if the soils become too dry. As suggested in my introduction, if you can grow Blue Gum, Cypress and Pine you can probably grow Redwoods. Pick the sheltered, wet areas on your farm. My trees are planted in an area that is totally waterlogged in winter to the point of being impossible to drive over in the 4WD. I targeted one site for Redwood because I felt they would be better than eucalypts in controlling tunnel erosion. They have a dense fibrous root system that tends to graft together forming a root mat that binds the soil. The tunnel erosion has stopped.

I've seen Redwoods growing well in both temperate and subtropical areas in both Australia and New Zealand. Have a look in and around the parks and gardens in your area: Redwood was commonly planted in rural gardens in the late 1800's. The fact they have survived in many areas suggests that, once established, Redwoods are quite drought tolerant. Of course, the wetter your climate, the deeper your soils and the more shelter you have the better for Redwoods.

Redwoods can be grown from cuttings or seed. There are a small number of nurseries that grow seedlings for plantations from seed imported from New Zealand or the USA. I like to plant them out as two year olds so I pot the seedlings up in 6 inch pots and grow them on in the back yard for another year. Cuttings should only be taken from vertical shoots (preferably suckers of a cut stump). They take a little long to get started by ultimately grow as fast. Cuttings from branches tend to grow sideways.

I start my trees off in plastic tubes to protect them from sheep, rabbits and wallabies. They seem to like the humid conditions in the tube and it allows me to safely spray around the trees for 2 or 3 years to control grass competition. Redwood can take more than 5 years to reach 2 or 3 metres tall so requires plenty of early tending and protection. Corrective pruning for form provides a single leader that is later pruned (to a stem diameter of 8cm) for clearwood production. Because almost every tree grows straight there is little need to cull for form. If a tree is damaged by wind or stock simply cut it off at the base and it will regrow. 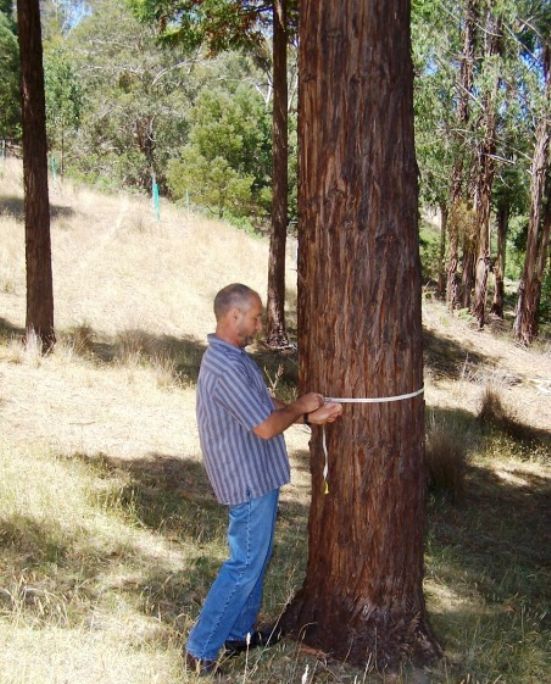 The long rotation lengths associated with growing Redwoods tend to frighten off the institutional and corporate investors. But for those of us planning to pass on a healthy and productive forest to the next generation they might be a perfect option. I started with just twenty trees which now form a really special place on our farm. It even has value for wildlife: owls regularly nest in my Redwoods and small native birds are often seen harvesting insects from the rough bark.

I have since planted hundreds. I don't plant them close together in rows - I prefer an irregular spacing of around 6 to 8 meters between trees with grass between them. Using the tree shelters I am able to plant them exactly where I want and continue grazing the area with sheep. If your forests look good then you will be less worried about waiting for them to grow. 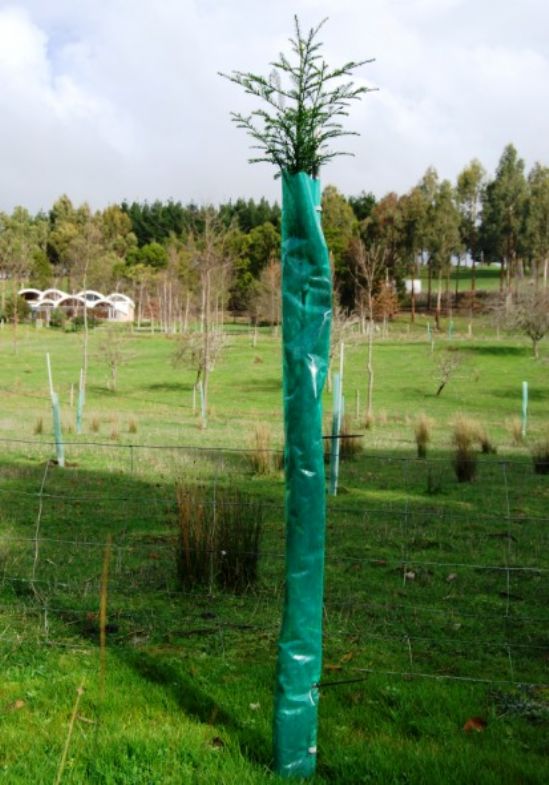 LEARN MORE: See my chapter on Redwood in my Book: "Heartwod - the art and sceince of growing trees for conservation and profit"