Trees and Fire
Can trees help you survive a wildfire?

Other than a very slow cool fire which burnt down the hill into our farm I've been lucky not to have to test my theories on farm trees and fire. I appreciate that others have not been so lucky. All I can do is study the science, talk to farmers who have experienced intense fires and draw my own conclusions. I certainly feel confident that considered species selection, strategic design and careful management of trees on farms can help protect your assets and your life. And, I am sure that clearing all trees from you block it not the best response.

This house survived an intense wildfire in Western Australia. Surely the trees helped.

But, every fire is different and the more extreme the conditions the more unpredictable the outcome. So, before we look at trees we need to understand fire weather and its impact on fire behaviour.

The forest fire danger index (FFDI) incorporates not only temperature, humidity and wind speed but also a measure of how dry the fine forest fuels are. When the rating was developed in the 1960s the benchmark was Black Friday, 1939. Using records of the weather and fuel conditions the researchers allocated Black Friday a FFDI of 100: the worst they might expect. Over summer, the forest FFDI in Victoria generally ranges from about 10 to 70. If it gets above 30 the authorities might call for a total fire ban. If it gets over 50 the consensus is that, due to fire spotting behaviour, it is nearly impossible to fight a running forest fire front. If it approaches 100 then we're looking at a Black Friday type event.

On February 7, 2009, the FFDI was well over 200. No matter how many fire bombers or tankers were on hand, if a fire got going it would run until the fuel ran out or the weather changed. But, if the fire was in the forest and large enough when the cool change hits it could be too late. By then the fire would be generating its own weather - a fire storm - and the only thing that would 'change' would be its direction.

For farmers in south eastern Australia this means the fire can come from any westerly direction: from north around to the south-west. Given you'll be seeking cover when it hits how the fire behaves depends on wind flow, topography and fuel.

Fire research suggests that if the wind speed doubles, the rate at which a grassfire spreads might increase three-fold. A fire's intensity is dependent on the amount of fuel burnt and the time taken for it to burn. So, an increase in the rate at which the fire spreads directly increases its intensity. The hotter the fire, more it is able to dry out the fuel in front of it and therefore the faster it burns - and so on.

Then there is the effect of spotting and fire storms. Eucalypt bark and leaves can stay alight for many minutes. Blown ahead of the fire front they ignite spot fires. If the main fire is large it will be drawing air in from all directions. As a result the spot fires can be blown back towards the approaching fire front. No wonder the survivors talk about fire coming from every direction.

The next factor to consider is topography. Ground slope directly affects the rate at which a fire spreads. Fires travel much faster uphill than downhill: every 10 degree increase in slope doubles the speed at which a fire spreads. Aspect is also important because it affects the quantity of fuel and its moisture content. North-westerly aspects are generally the driest but may not carry a lot of fuel. If you have the opportunity to site your house then don't place it at the top of a north or west facing slope. If the house is already there then you need to think carefully about the vegetation on the slope below.

As landholders there is little we can do to change the temperature or humidly. But, we can change the wind speed and the fuel:

A well structured shelterbelt can reduce the wind speed by as much as 50% for a distance of more than 10 times its height. This would reduce the rate of spread of a fire by more than half and the intensity almost four times. From wind tunnel research and field studies we know a lot about the pattern of wind flow over and around shelterbelts. If you want to use a shelterbelt to reduce the impact of a fire front then it is best to locate it at least 4 tree heights away from your assets. This provides some additional protection in the event that the shelterbelt itself catches alight. 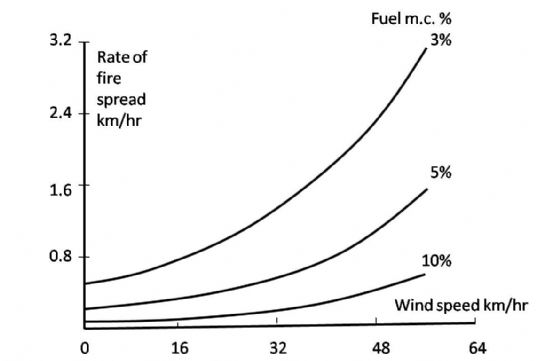 The influence of wind speed and fine fuel moisture content on the rate of spread of a fire. Adapted from fire research by McArthur in 1967.

Fuel is any material that can be burnt by fire. Its size, moisture content, arrangement and other characteristics influence the way the fire burns and the risk of spot fires. Fine fuels, including grass, pine needles, leaves and bark, dry out as the fire approaches. They then burn quickly. Coarser fuels, such as branches and logs, burn for longer but only after the fire front has passed.

The arrangement of fine fuels therefore is critical. Pastures trampled by stock will burn more slowly than a standing pasture. The more continuous the fuel the easier it is for the fire to run, pre-drying any fine fuels as it goes. Reducing, compacting or separating the fine fuel components of a dramatically reduces a fire's intensity.

Some types of vegetation contain oils or other compounds that increase their flammability and might allow them to say alight for longer. Eucalypt leaves contain oils that vaporise as they are heated and burst into flame when ignited. Other tree and shrub species have a high moisture content in their leaves during the fire season and are less likely to burn. When selecting tree and shrub species farmers should also consider the following: 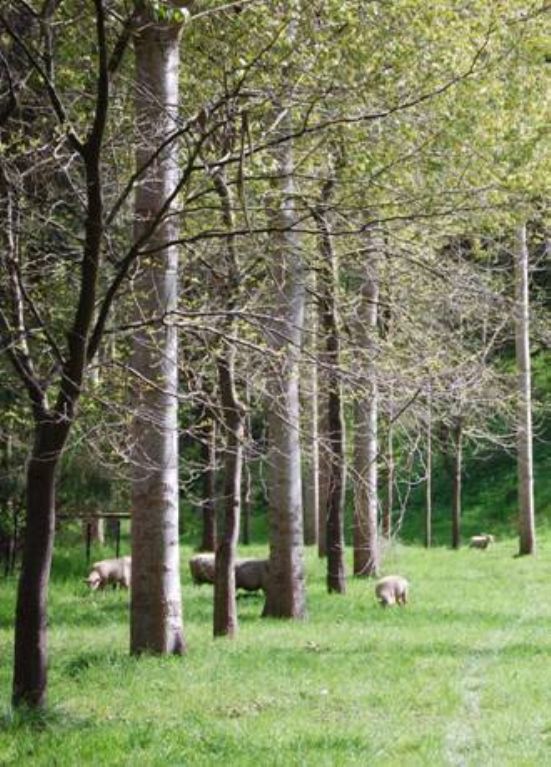 More important than species selection is the management of the trees as a forest or belt. By pruning the lower branches and keeping grass down it is possible to reduce the risk of a fire jumping into the canopy. I use grazing combined with pruning to create a fire to create a fire shield that will deflect the wind and trap the embers so as to protect my farm buildings.

Of course, fire behaviour can seem unpredictable but there is a lot of good information available that can help farmers make sensible decisions about where they might grow trees, the most suitable species and how they should be managed in order to reduce the risks. It is possible to have the benefits of trees without making your farm a fire trap. Clearing might make you feel safer but in the event of a wildlife it might only improve the view of the fire as it comes hurtling towards you.